I am embarrassed to admit how little I know of my Canadian neighbors.  I would be hard pressed to list all ten provinces let alone locate them on a map. Even though Minnesota shares a border with two provinces (Ontario and Manitoba), I’ve only crossed the line a handful of times and only for a short period.  Now that we’ve spent a few weeks in Canada,  Stephen and I are acclimating and learning all about our neighbors to the north.

We are currently house sitting in Drayton Valley, Alberta a small town known for its oil reserves.  The population is 7,000 but fluctuates when the demand for oil surges.  Higher demand brings lucrative jobs and attracts workers from all parts of the country.  Four years ago during the oil boom this was a hopping town where it was impossible to find a hotel room and the unemployment rate was in the low single digits.  There are still oil rigs throughout the area that pump  24/7 but for now the boom has slowed and life in Drayton Valley is a bit quieter.

While house sitting we are responsible for the care of an 18-year-old dog and a big tabby cat.  Patch the dog is content to sleep most of the time but does insist on a walk everyday at the exact same time.  He has an amazing internal clock and when the clock strikes four Patch steps off his dog bed, stretches and then shakes his whole body while walking to the front door.  Time for the daily stroll!   No leash is required as he ambles four houses up the street, crosses the road, does his business and then returns home.  Gingy the cat who is usually out hunting for mice appears for this walk and accompanies Patch.  They spend ten minutes together on the daily ritual and then the dog returns to bed while the cat does cat things.   We call it the four o’clock pet parade. 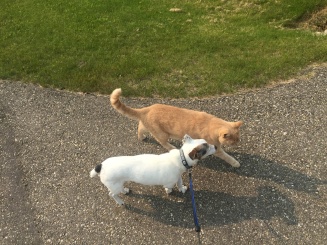 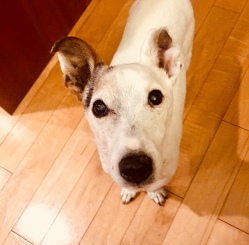 Edmonton, which is 85 miles east, is the closest big city to Drayton Valley.  With the population at more than a million,  it is a bustling place.  We spent a few days exploring and searching for typical Canadian food.  The cuisine is not much different than ours  but we had to try the coffee and timbits at Tim Horton’s as well as poutine…French fries drowned in gravy and cheese curds. 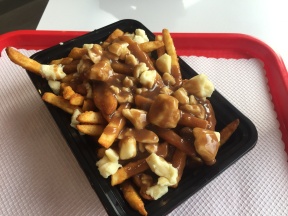 After all this food we walked the city and discovered a beautiful skyline with the Saskatchewan river running though the center.

Although we did have to show our passports at the border sometimes I have to remind myself that I’m not in the U.S.  Many retailers are the same and fortunately Canadians drive on the right.  The currency is different but I have yet to touch any paper money or coins. It’s easier to use a credit card that doesn’t charge a foreign transaction fee.

We have thoroughly enjoyed our time in Alberta.  Our hosts Dieter and Antoinette have welcomed us and made us feel at home. They are also seasoned travelers and have suggested several new places for us to explore.  Our world is expanding and we can’t wait to see what comes next.